It’s no secret that the Raspberry Pi is a hackspace favourite. From running 3D printers to remote webcams to home automation, the Pi is a must-have for the hacker’s utility belt!

Thanks for the heads up

Saw it this morning. Ordered, hopefully it will be here this week.

This is exciting news, I look forwards to having a requirement to use one.

I’m hoping it’ll be great for a Kodi (was XBMC) server! The old rPi I tried struggled with HD video when the files were over ethernet.

I’m sure Leo can’t wait to get Windows 10 on the Rasberry PI.

Hehe… perhaps not. I still prefer to do my remote management via SSH, or Mosh which works great for mobile connections. Also I think it’ll use up that 1GB of RAM much faster than a nice lightweight Arch install.

Have they fixed the memory leak bug on the ARMv6 version of Mosh yet?

So who’s got their Pis yet?

Ordered mine from RS. Got an email and they said my Pi would be delayed.
So I got into $work the next day, and $boss orders 4 from CPC last thing in the evening. They arrive here the next day. Not fair but I guess I should have jsut ordered from CPC in the first place.

Fingers crossed mine turns up soon…

Meanwhile here’s one of the new Pis at $work, we’re hooking up several ultrasonic sensors and using a good number of them (thinking about 20 at the moment) to fire off events via tcp/ip to a multi-track playout server to play back sounds for an interactive installation. Pretty excited for the final install if we get the job

Worth a read for anyone with new RPIs 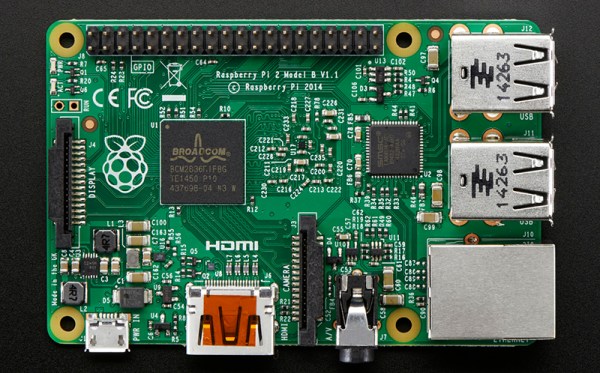 Photonic Reset Of The Raspberry Pi 2

For the past month, the Raspberry Pi 2 has only been available to the Raspi Foundation, and for about 2 weeks, select members of the media who have worn the Raspi 2 on a necklace like [Flavor Flav]…

U16 chip is designed for use inside cases, and strong (camera flash/laser) light can induce a photoelectric effect in the silicon and cause the Pi to reset.

confirmed it affects our Pi2s, so we’ve painted the edges of U16 with black nail varnish. so far so good, fingers crossed

Will the crossed fingers work ore effectively with black nail varnish applied too ?