We have now officially acquired our first laser cutter! It’s still in need of some work to get it fully working, and it is currently in the Camberley Division of SHM pending a permanent home being ready.

I have created an SHM Laser Repository in the SHM GitHub for any documentation and plans etc that might become useful, and has been building a SketchUp model, so if anyone wants to incorporate it in any plans, go nuts.

I have also started planning the bench it will need to sit on. This beastie is heavy, so it needs to be pretty substantial. We will also be able to incorporate some material-storage, and places for the water tank and various pumps it needs.

Some information on the pedigree and condition of the cutter…

[quote=“Malcolm Napier”]I am in the process of (slowly) getting it back working again. I have had Ryan and Richard Ibbotson’s help and established that the laser tube is fine (they fixed one of the three duff PSUs that it came with) and I am going to reconnect the belt to the x-axis, hopefully tomorrow evening. I have bought a water chiller for it and it will need an extraction system of some sort once I have found a home for it. Richard & Ryan are also of the opinon that it needs some interlocks to make it safe/suitable for Hackspace operation.)

I got it for free from Richmond MakerLabs on the understanding that if I was successful in fixing it, I would find it a home at a hackspace in need of a laser cutter. Might that be you guys or are you already sorted laser cutter-wise?[/quote]

They suspect the problems they were having were due to a series of faulty power supplies, rather than anything problem with the cutter - it was working fine for over a year, I believe.

This is a summary of the current condition:

[quote=“Malcolm Napier”]Also, please be aware that it is not fully functional yet. We know that that tube and high voltage PSU are OK (see the damage that it did to the screwdriver handle in the first bunch of pictures). We know that the controller moves (and homes the y-axis) but until yesterday the x-axis belt was not attached. The next stage is to test the range of movement is OK. After that it needs “plumbing in” to its new location (air pump/water pump/water chiller and extraction) and testing out more thoroughly. (For example it has 3 PSUs. Was that bad luck or is there still something that might blow the PSU (we have spare if that is the case and we think that the PSUs were all problems)?)

Then it needs the “essential upgrades” to make it a Hackspace tool rather than a Hackspace project. These are mainly a current meter and interlocks.[/quote]

And this is part one of a series of videos titled Chinese laser cutter tutorial.

So the cutter initially had a little bit of fire damage from the previous user.

I took off the zero-guide rails and cleaned them up a bit, and scraped the burn off the bed:

And I made a reservoir for the cooling water:

Is that a purple reservoir ! Awesome

I also tested the lower-power side last night. Seems to home okay, and the control panel does what I’d expect.

Don’t get too excited, it’s not the most inspiring of videos, but babysteps…

This isn’t something I’d ever really thought I’d be buying, but I’m currently tracking a couple of bouncy castle blowers, which are apparently really good for laser cutter air extraction

This isn’t something I’d ever really thought I’d be buying, but I’m currently tracking a couple of bouncy castle blowers, which are apparently really good for laser cutter air extraction

One consideration at the makerspace will be noise, as large fans can be quite noisy and might also cause vibrations through the building, therefore we have to be mindful of any impact to other building occupants and nearby neighbours.
Though it might be worth taking a chance if one can be picked up locally to save postage costs and it could always be sold on if things didn’t work out.

Yeah, noise is a concern. I was thinking of maybe having the small default fan on there for most uses, but if we’re cutting something that’s a little more noxious, we have the option of attaching The Monster’s Breath to boost the venting. Paper, acrylic and plywood should be reasonable to run on the default fan, but anything on the stinkier end of the allowed-list might need the blower.
I was also going to incorporate the fan into the bench somehow, so perhaps it’ll be suspended from rubber or something to reduce the vibration noise.

I hooked up the water pump and air pump this evening just to check the plumbing, and discovered that none of the air was getting to the tip of the nozzle. It turns out there was a whacking great hole in the hose at the top of the ‘hot end’, wrapped in some electrical tape. I fixed that with a bit of heat-shrink tubing, so now all the fundamentals seem to be in place.

Yeah that’d do it…

What’s the hose ID if you know? I might have some kicking about.

Not sure, didn’t measure it. It goes into those blue clicky clip hose port things, so my silicon hose I have for the aquarium didn’t lock in. Will have to check later.

So it seems the basics must be okay, because @Jagmills and I made some holes in some paper today…

I think the alignment is sllightly off, because the holes are a weird shape. Also, this was achieved by pushing the ‘test’ button on the Laser PSU, we couldn’t get any laser activity via the control panel. Still, progress. 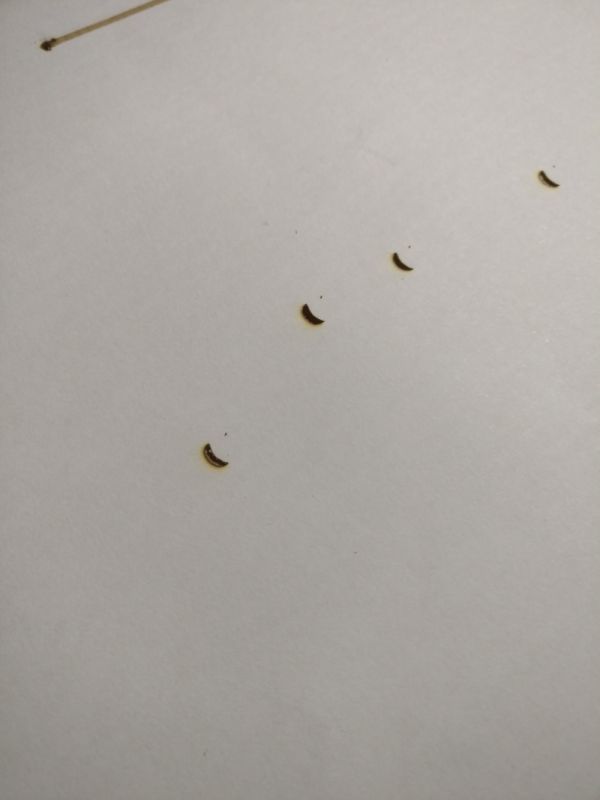 Malcolm here, from a cafe by the beach in Kalymnos.

Seems like you are making much better progress than I expected. I thought you would all be down at The Boilerhouse, carpentering, painting, hacking RFID entry systems, etc…

Anyway, from what you have posted, I need to add:

The water chiller is in the boot of my car in Maidenhead. For regular (Hackspace) use the water chiller will need to be fitted. I was planning on bringing it over shortly after my return - towards the end of September.

This post from the rLab thread is very relevant:

Hi I’m Jon from RML, and I’m mostly responsible for the dismantling of the x axis tensioner at Richmond, but also buying the spare belt and ‘gearwheel’ that you should have received with the cutter. We concluded that the original aluminium belt tensioner was wobbling and that this was caused by the failure of the brass axle due to wear, and the failure of the bearings within/between. I think it needs a new axle turning, and then new 9mm bearings should fit into the new gearwheel (IIRC that’s what I spec’ed it to be drilled for). I was using the laser for engraving scale brickwork on buildings for a model railway layout, and the wobbly x axis was causing problems with alignment across the work piece (brick courses didn’t line up).

So the x-axis idler needs further attention, as may the running line of the x-axis belt.

I suggest that you invite Ryan from rLab to show you how to focus the laser beam. If he can’t do it, and he is happy that Alex has the necessary knowhow, then ask Alex.

The same is true of use of the control panel and other manual control of the laser.

Your neighbours at The Boilerhouse might object to smells as well as noise. Filters from hydroponics have been suggested as a possible solution for smells.

I thought you would all be down at The Boilerhouse, carpentering, painting, hacking RFID entry systems, etc…

We had some delays getting access to the new space, so we’re on hold at the moment, so I’ve just been tinkering with the laser in the evenings to make sure we have all the bits we need to hit the road running. I thought it would be a shame if we get someone to dedicate some time to help us, only to find we’re missing something trivial to get it going.

Have fun at the beach

Just received some material to try out once it’s working. @Macaba may not approve of the precise shade of purple supplied, but it’s still pretty

I, however, approve entirely

My requirements for non-screen shades of purple are a little more relaxed. Macaba-approved.

Some progress has been made. Looks like it’s sorted now, apart from the safety improvements.

Here’s a test with paper. This was at 15% power, 100mm/s. This was generated from a bitmap, and cut with a raster scan. The uncut stripe across the top bird is where I tried to tweak the power down to reduce the burn, but it turns out that below 15% nothing happens at all: 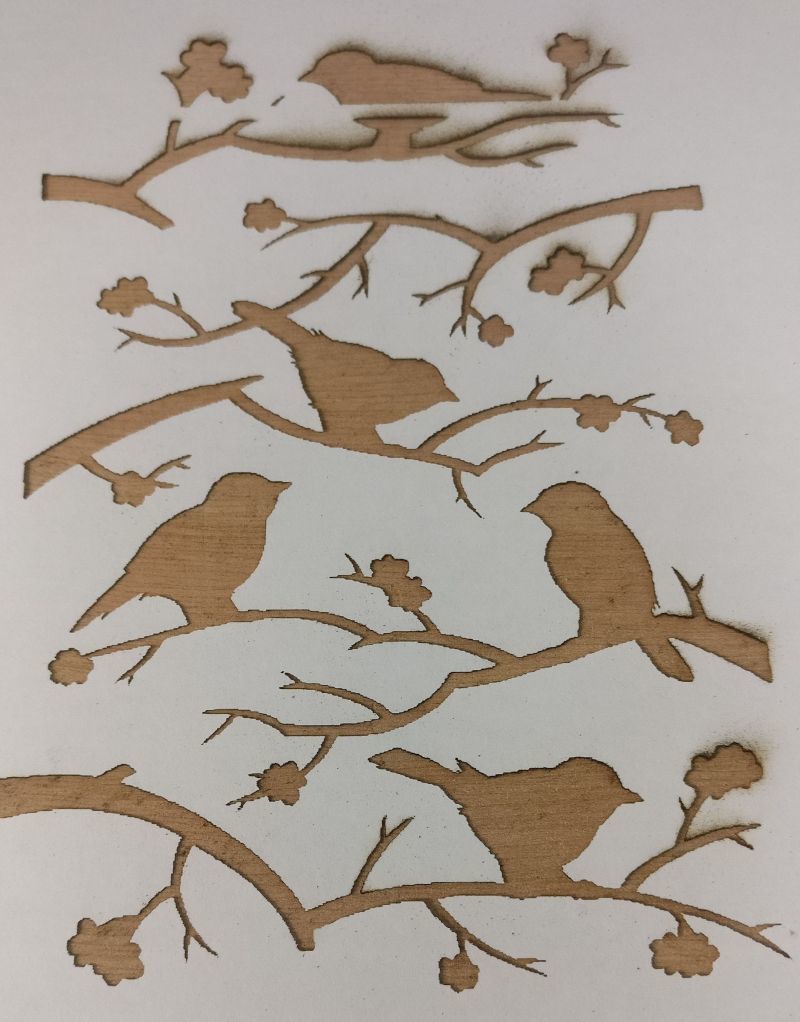 And here is some 3mm perspex, 85% at 6mm/s. In this one, I converted the bitmap to curves using CorelDraw’s tracer, so this was cut as outlines:

And here’s a little video of it going: