I keep finding myself in need of a very high speed & medium torque closed-loop servo at a reasonable price. I’ve seen many other projects in the space that would also benefit.

The conclusion for version 1 is to use a DC brushless outrunner with GT2 timing belts (the popularity of reprap has led to an explosion of cheap aluminium GT2 pulleys), with the loop closed using a magnetic encoder on the motor (so technically used for motor commutation rather than output position, I’ll consider having 2 magnetic encoders if neccessary).

I’m estimating a maximum torque of 262.5Ncm when the motor is driven at 24A (for short durations). I’m considering thermal epoxying some thermistors into the motor windings to implement thermal limiting in the controller firmware.

Don’t do it! @mrdino will turn your lovely robot servo motor into a horrific Frankenstinian hybrid of Lego and printer! Do you really want to be responsible for the LegoPrinterBot uprising?

It’s already a hybrid of plumbing parts, wood work, zip ties zip ties and bolts - none of them found as a lego ‘official’ part … hehehe…

I started to wonder if there was a more anti-faff way of doing this? So I had a look at what a spur gear design might look like:

I will probably make one of the spur gear designs to see how well a SLS printed spur gear train works.

I’ve been working on a similar project, though more aimed at torque rather than speed. I have a prototype brushless motor controller designed for use in a servo. The controller works from 6 to 20 volts, and with a heat sink should do 40 amps. It uses two hall effect sensor to detect the rotor position. There is also a prototype planetary gearbox with 45:1 and a design for 21:1 version they are noisy though, so it needs work.

Here’s some pics of what I have so far:

If your interested in using my controller, I’d be happy to help and get any suggestions for improvement. It would be great to have the designs for a couple of different gearboxes for different applications.

That’s an incredibly good start! Thank you for signing up to the forum and sharing, how did you find out about this forum?

I’d be very interested in collaborating, we have different, but complementary, end goals but very similar challenges along the way.

Are you a regular user of IRC? We’re very active on #sh-makerspace at Freenode, it would be a great way to chat informally along the way.

With regards to the motor controller - I’d be interested to find out more, I will probably try out a couple of designs. I’ve already ordered someone else’s controller design based on STM32F446 & DRV8302, once I’ve found a board that works well then I’ll be re-laying out the PCB to fit the back of my gearbox.

Charles dropped into one of our open session evenings a few weeks back and mentioned his interests.

I thought I’d print a mockup spur design to get a feel for the size and mounting possibilities. 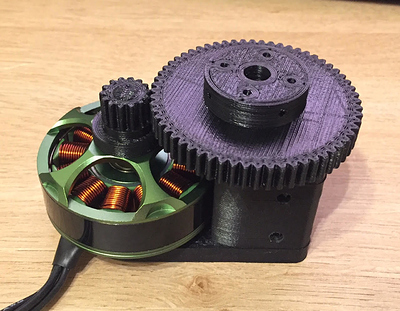 Four of these, on a skateboard. Move over, Casey Neistat!!

Looking great! What are you planning to make the final versions out of ?
BTW. Thanks for the pointers to the motor controllers, I found it really useful.

Both the belt and spur gear versions (in my post on Oct 17) were 3D printed using an SLS nylon process.

Conclusions from this 1st prototype run:

I’m now looking at using a Delrin injection moulded large gear, and either an SLS printed small gear or a steel small gear. I’ve also adjusted the ratio from 14:60 to 12:60.

I’m now waiting to receive the 2nd prototype run from the SLS printer, which is a tweaked version of the spur gear design with 12:60 ratio and different bearings.

A note on preloading; preloading is used to eliminate any wobble in the bearing (thus shaft wiggle). Adding preloading in this design is very easy with a spring between the bearings. I’m aiming for a fairly high preload (for this size bearing) of 25N +/- 5N.

On the electronics front; I’ve been made aware of a new contender, the VESC:
http://vedder.se/2015/01/vesc-open-source-esc/

Particularly interesting because the designer is going to release a new version within the next few months with the intention of turning it into a fully fledged open source project. Interesting video on the new design and software here:

With any luck, around the time that I finish the mechanical build, the VESC 6 design will be ready for use…

I have just noticed this thread - so apologies for joining the party late.

I had two thoughts, reading through it.

Thanks for the input and please keep inputting any ideas that pop into your mind as I go along.