An example of Graphical Word Tokens

I’ve been playing around with alternate ways of representing words in graphical form.

The current theme is to have each unique letter in a word captured as a position on a circle.

Individual letters occupy specific positions around the circumference, in the same way that hours are represented on a clock face, these could be described as Radial Alphabet Tokens.

The image below shows the whole alphabet displayed in one graphical token.

Words are represented by the subset of the alphabet they contain, so geography would be shown like this.

Note that the two Gs share one radial location and letters are not represented in order.

The phrase ‘the long goodbye’ is made up of three word tokens.

This style of token is visually simple but not particularly striking.

Things get a lot more appealing when we add some colour, with each segment between the letters in the symbol being shaded.

Introducing colour allows for different layers of interpretation to be added to the radial alphabet tokens. A STOP sign could be rendered in shades of red like this ( we get a cleaner visual look by dropping the text labels from around the outside).

The use of colouring schemes to convey meaning is quite flexible and can be adapted to fit the desired application of the tokens and provide a unique visual identification method.

Nice - these could be cool for generating uniqueish fingerprints or symbols for stuff. Reminds me of the Walking Numbers paper, where they do almost the same as your second diagram, but instead of putting all the lines on a single circle, you join each one to the previous, creating a wandering line.

This is Pi rendered in base-4, to 100bn digits. The number starts at red, and wandsers up the spectrunm: 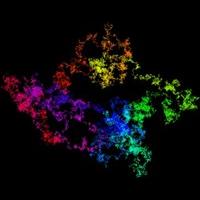 100 billion step walk on the digits of pi

This is a walk made out of the first 100 billion digits of pi in base 4 with the following rules for the steps: - 0 right - 1 up - 2 left - 3 down The color indicates the path followed by the walk: it starts at red and moves up the spectrum...

I could picture a makerspace full of items decorated with circular stickers along the lines of:

Or in a bolder colour scheme:

Or labels with personalised colour combinations representing their owner, along the lines of Gravatars.

Can you make that last one into a cylinder?

I wonder what can be done to indicate anagram-collisions.

I have an idea for repeated letters and perhaps something to distinguish letter order using colour coding, they may appear in version 2

I think the initial goal was to have distinctive visual symbols which can be used in specific contexts. Like identifying people, indicating the use conditions of equipment or things, conveying public information, bringing a consistent visual style through the use of colour palettes to an organisation.

Yeah, I like them. I suspect they sort of don’t mean anything consciously, but one will soon start to associate them with whatever they mean, based on context and repetition. How are you generating them? Are they a Mathematica script?

Yes, good use of colour would probably help with that association.

Would it be made in anything else

Currently they are implemented in a Mathematica notebook, but that might be reworked to be a CLI based version which could then be generated/served via Mathematica on a Raspberry Pi.

Other colour choices are available if it’s too bright

For the little avatar I actually quite like it. The massive 450px version is a little bright

Can I have one? Pretty please?

Of course you can

, later when I’m more organised people can pick their own colours, but read back and you’ll see you already have one, albeit with text added

Does that colour palette suit ? If not give me one or more RGB colours you like and I’ll rustle one up without text for you .

Or you can choose a named predefined Mathematica colour scheme here.

I hacked your account and added the one @stochastic_forest generated above

Mathematica on the rPi is free, right? Maybe we need a server that can be polled to generate these on request

Yes it is free and yes, that’s what I was trying not to think about

Derp, I didn’t even see